30 Seconds To Mars fans, get excited!! Your favorite band are back with their first album in 5 years and an EPIC North American tour to accompany it!! With support from Welshly Arms, they’re coming to the Oak Mountain Amphitheatre on Tuesday 3rd July 2018!! The countdown begins – make sure you grab your tickets while they last!! Hit the “Buy Tickets,” button now to get yours while you can!! 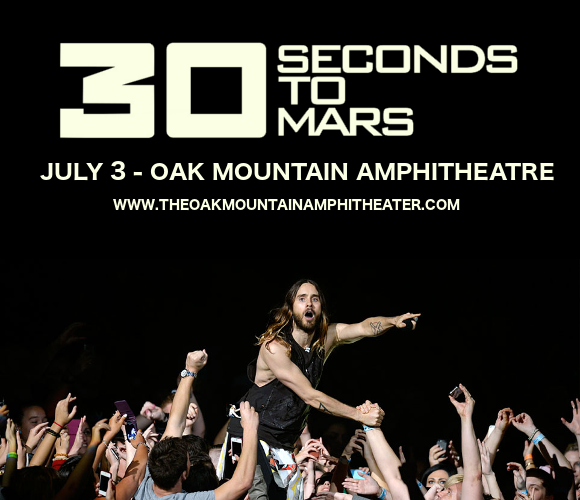 From the moment they first appeared on the alternative rock circuit, 30 Seconds To Mars have been showcasing their thoroughly unique sound, one that isn’t afraid to embrace different genres from hard rock, to indie, to experimental. Each of their albums has been completely distinct and fans are clamouring to know more about the mysterious upcoming album!!

"It's sometimes hard to talk about it when you are still doing it because you don't have perspective and you need to look back on something like that, because as you are climbing mountains, you are so focused on securing a foothold or not falling off that it's sometimes hard to speak eloquently about it,” Jared Leto said, but when pushed for details, simply stated; “The new album is very different, we break a lot of rules – maybe that we didn't have for us – but we shattered some expectations that other people may have had.”

The new album – still currently without a name – is due for release April this year. We can hardly wait!! Grab your tickets now and get ready to experience all the new songs LIVE with 30 Seconds To Mars!!