You 'oughta know that the one and only Alanis Morissette is hitting the stage at Oak Mountain Amphitheatre, bringing her iconic hits back to the live stage, celebrating 25 years of her RIAA Diamond and global hit album "Jagged Little Pill". Hailed as "Queen of Alt-Rock Angst" by Rolling Stone, the queen continues to serve her healing music powers with her new meditative record, The Storm Before the Calm. With a new record and a journey of twenty-five years since the release of Jagged Little Pill, Alanis Morisette's craft proved to be a timeless favorite with fans, new and old, flocking to sold-out concert venues to catch the legendary singer perform live. So, better hurry and grab those tickets while you can as she makes a rare visit to the Oak Mountain Amphitheatre on Friday, 16th of September 2022. 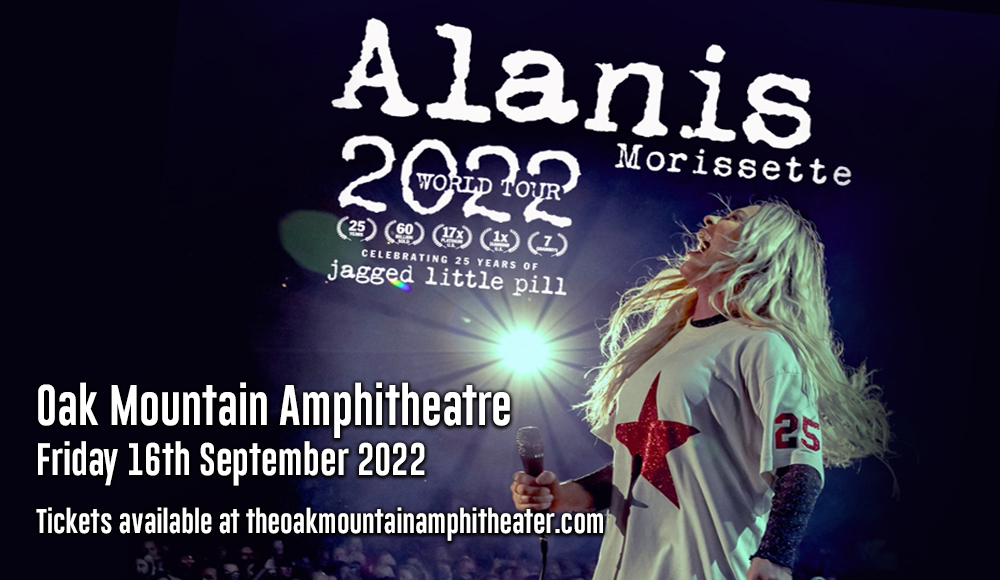 Having emerged in the early 90s, described as the "Debbie Gibson" of Canada, Alanis Morissette found her big international breakthrough with the release of her global hit single "You Oughta Know". From then on, her third studio record, Jagged Little Pill, made waves internationally. Highly acclaimed and much-loved by critics and listeners several years later, the record made appearances in Rolling Stone's 500 Greatest Albums of All Time lists. As one of the industry's most iconic women to release songs that strike right through, she was included in VH1's list of "100 Greatest Women of Rock and Roll" in 1999.

Fast forward to 2022, Alanis Morissette is still alive and kicking in the music scene. She is celebrating 25 years of her iconic record, throwing in sold-out shows at her Jagged Little Pill tour. Featuring melodic tales that fans couldn't get enough of, the record continues to live on and win the heart's of every fan – new and old.

Over twenty five years since its release, fans are still holding on to the lessons they've taken by heart through Alanis' legendary record. "I was 40 when ‘Jagged Little Pill’ came out and I fell in love with the voice and her look, but mostly the yearning pain I related to," a fan named Levine shared with TODAY.

As exceptional as she is, the woman proves this with her several accolades which includes seven Grammy Awards, fourteen Juno Awards, and one Brit Award. Selling over seventy-five million records around the globe, she holds the title "Queen of Alt-Rock Angst" by Rolling Stone, holding the record for the most #1s on the Billboard Alternative Songs chart for any female artist.

Beyond Jagged Little Pill, her succeeding records also contributed iconic songs that further won her the world's love for her craft. Her hits from Jagged Little Pill and her other albums include "You Oughta Know", "Head over Feet", "Ironic", "Hand in My Pocket", "Thank U", "Hands Clean", "Underneath", and many more.

This 2022, the woman is back, dropping a unique meditation album named "The Storm Before the Calm", premiering her track "Safety-Empath in Paradise" last May.

With new music up in the airwaves and over twenty-five years of Jagged Little Pill, don't miss out on Alanis Morissette's live tour as music comes sweeping concert venues around the globe, sending healing vibrations as fans can finally catch their favorite artist perform live. As one of music's greatest women, don't miss out on a one-of-a-kind Alanis Morissette experience at Oak Mountain Amphitheatre by booking your tickets now!