Harmonious live wires and country rebels Florida Georgia Line are taking over North America this summer with their red hot Anything Goes Tour! Promoting their album of the same name, the duo will be joined by the phenomenally talented Thomas Rhett & Frankie Ballard, and they'll be bringing their energetic show to Oak Mountain Amphitheatre on Saturday 30th May! Get ready to dance like no-one's watching! 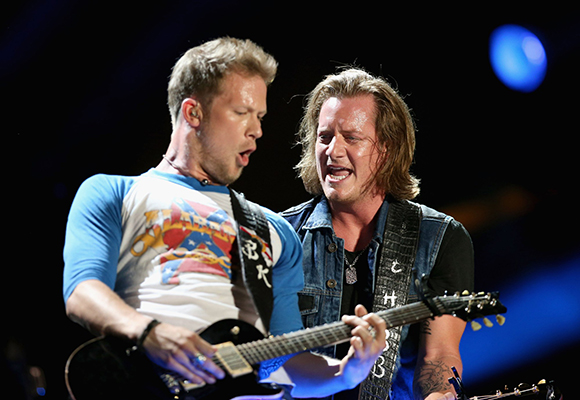 Bro-country duo Florida Georgia Line exploded into the world of country music in 2010 with their debut EP Anything Like Me. Discovered at a county fair by Nickelback producer Joey Moi, the success of their song “Cruise” on iTunes led to a great deal of major label interest and eventually a deal with Republic Nashville/Big Machine Label Group. Their signature anthem went on to spend 24 weeks at number 1 on the Hot Country Songs chart; the longest stay at number 1 in the chart's 70-year history. It was also ranked as the number 1 country single of 2013 by Billboard and reached 8x platinum. Their first studio album Here's to the Good Times topped the charts, staying at number 1 on the Billboard Top Country Albums chart for ten weeks, and was certified double platinum. Although their music has its roots deep in the country traditions of America, Florida Georgia Line draw from myriad musical genres including hiphop, Christian rock and hair metal, cultivating a sound that is entirely one-of-a-kind.