Hootie & The Blowfish are trending news once again as they let out a big announcement that they are reuniting and hitting the concert stage after being on hiatus for more than a decade. The band is currently trekking several cities — a whopping tour covering the expanse of 44 North American cities. This "Group Therapy" tour comes as music to ears of fans over here where Hootie & The Blowfish are playing to a very limited one-night-only engagement at the Oak Mountain Amphitheatre on Friday 6th September 2019. No need to hop on a time machine to see this nineties phenomenon. All you gotta do is secure your seat and a spot where you can join in on the fun in this 90s jam session with Hootie & The Blowfish. Don't miss out on this exciting run, book your tickets now! 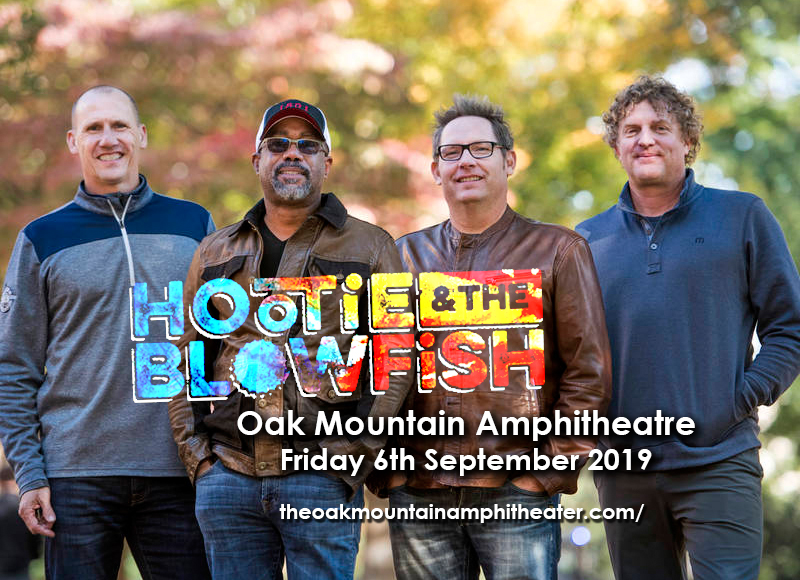 Hootie & The Blowfish found fame in the nineties, but their music's staying power has kept fans at bay — longing a possible reunion after the band went on an indefinite hiatus both from studio recording and performing live. Meanwhile, a new generation of fans was rediscovering a treasure trove of rock music gems from the band, namely: "Hold My Hand," "Let Her Cry," Only Wanna Be With You", "Time," and a whole lot more.

Lead vocalist Darius Rucker pursued a solo venture that was well received by many. However, a Hootie & The Blowfish reunion was still on everyone's mind. Finally, after more than a decade of hoping and waiting, a single tweet exploded — Hootie & The Blowfish are getting back together and sealing the deal with a tour!

Band member Mark Bryan was quoted saying:
“There’s nothing like playing music live.”… For the first time in nearly 20 years, we’ll be coming back to Columbia, South Carolina where it all began.”

And yes, it's been 25 years since their debut album “Cracked Rear View” was released. Those chart-topping singles propelled album sales to reach 16 times platinum, making it one of the '90s and all-time favorites and best-sellers; and at the same time, bagging a Grammy Award for Best Pop Performance by a Duo or Group with Vocals in 1996.

Hootie & The Blowfish was and is still a big crowd drawer. With tickets moving out swiftly, book yours now and don't blow this chance of witnessing this highly anticipated reunion concert.