Korn & Alice In Chains have teamed up for an epic co-headlining tour, bringing you a mighty show that comes to Oak Mountain Amphitheatre on Tuesday 23rd July 2019! With a plethora of hit albums between the two of them, both of these bands have been hugely influential in the worlds of rock and metal, and the chance to see both of them at the one event is many a metaller's dream come true! Book now to avoid disappointment! 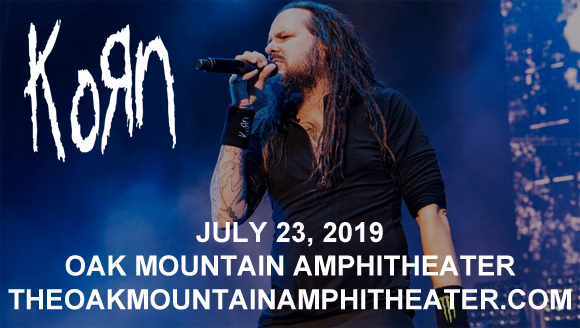 Formed in Seattle, Washington in 1987, Alice In Chains found fame in the 1990s alongside fellow Seattle bands  Nirvana, Pearl Jam, and Soundgarden as part of the grunge movement. The group became one of the most successful bands of the 1990s, selling over 30 million records worldwide (over 14 million records in the US alone), with two number one albums and six top ten albums on the Billboard 200 chart. The band's debut, Facelift, which was released in 1990, was certified double-platinum and lead the way for similar success with their third and fourth albums. In 1996, the band took an unofficial hiatus due to lead vocalist Layne Staley's struggles with addiction that eventually culminated in his death in 2002. In 2005, the remaining band members reunited for a charity concert and in 2006 Alice In Chains began touring and recording again with William DuVall taking over as lead vocalist full-time. Rainier Fog, the band's sixth and most recent studio album, was released in 2018, debuting at No. 12 on the Billboard 200 and receiving a Grammy nomination for Best Rock Album.