Country fans, get ready for the show of your life!! That’s right, in 2019 the legendary Luke Bryan is back on tour, and he’s joined on the road by the amazing Cole Swindell and Jon Langston! They’re bringing the show to the Oak Mountain Amphitheatre on Friday 26th July 2019 – don’t miss out!! Tickets are on sale now and expected to go quickly – hit the “Buy Tickets,” button to get yours!! 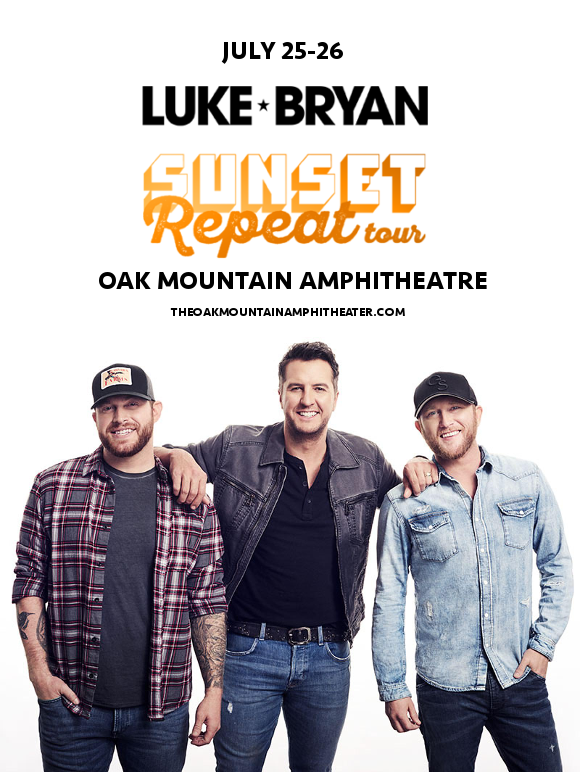 With fourteen number-one singles to his name across a plethora of no less than nine albums, including his latest, “What Makes You Country”. Luke Bryan has established himself as one of the driving forces on the country scene, leading the way when it comes to the modern sound of the genre.

With a career kickstarted by writing for the likes of Billy Idol and Travis Tritt, Luke Bryan had already shown himself early on a hugely multi-talented songwriter even before releasing his first albums. It’s no surprise that he’s taken that diversity forward into his solo career. The title of his latest album is a gentle dig at those who critiised the singer for his supposed lack of diversity. The title track was described by Rolling Stone as “a stomping Southern rock assertion of downhome cred that says, essentially, country is an expression that comes in many shapes and sizes.”

The question is, what makes YOU country?? Are you ready to show it in concert? Then make sure you’ve got those tickets, before other country lovers get ‘em first!!