The ultimate 2020 tour for metal fans comes to Oak Mountain Amphitheatre on Tuesday 6th October 2020, and this maelstrom of metal is going to hit hard and fast! Thrash metal power foursome Megadeth team up with pioneers of the New wave of American heavy metal, Lamb of God, for an unprecedented show of force! This sin't the first time these two meteoric groups have joined forces on tour, but this year will be even mightier than before as they're joined by Trivium and In Flames in support!

“We are happy to be a part of the biggest real metal tour of the year. This tour is the main event and represents heavy metal and the culture that goes with it," Trivium's Matt Heafy said about the run. 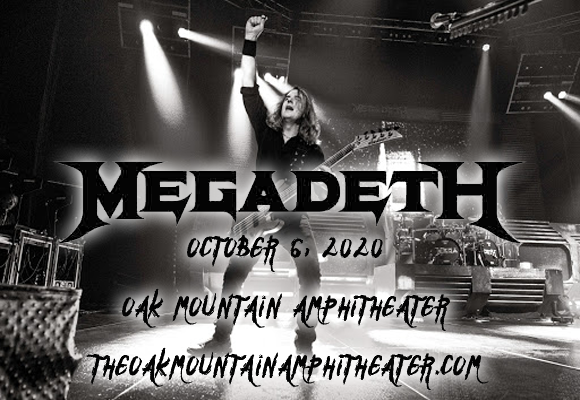 Drawing from the thrash metal and hardcore punk bands that came before, Lamb of God have continued a legacy of heaviness that sees them considered to be one of the seminal groups of the New wave of American heavy metal. The group currently consists of bassist John Campbell, vocalist Randy Blythe, guitarists Mark Morton and Willie Adler, and drummer Art Cruz. The band was formed in Richmond, Virginia, in 1994 under the name Burn the Priest, and performed and recorded under the name for five years, before changing it to Lamb of God to avoid being mistaken for a black metal band. The group's breakthrough came in 2004 with the album Ashes of the Wake, which was certified gold and reached number 21 on the Billboard 200. Their success only grew from there, with 2006's Sacrament receiving the Album of the Year award from Revolver magazine, earning the band its first Grammy Award nomination, and finishing as the year's top-selling heavy metal album. Wrath (2009) continued the group's streak of critical and commercial acclaim, earning them two more Grammy nominations and reaching number two on the Billboard 200, with Resolution (2012) and VII: Sturm und Drang (2015), both hitting number three on the Billboard 200.