If you long for the dark sound of the 80s, then look no further than this show at the Oak Mountain Amphitheatre on Friday 10th August 2018! The Cult are back, on a massive North American tour with the Stone Temple Pilots and Bush is back on tour, which means you can catch them live on! Get your tickets to see The Cult, Stone Temple Pilots and Bush live at the Oak Mountain Amphitheatre while you still can! 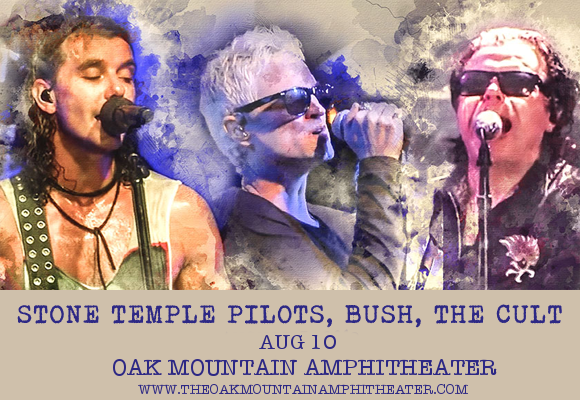 Currently consisting of band members Ian Astbury, Billy Duffy, John Tempesta, Grant Fitzpatrick
and Damon Fox, the band formed under the name Death Cult and later shortening to simply The Cult. They gained massive popularity in the UK in the Gothic rock movement for songs such as “She Sells Sanctuary,” and later made an even bigger breakthrough in the US with popular songs including "Love Removal Machine," and "Fire Woman," establishing a sound that had evolved into hard rock. In anticipation of the upcoming tour, fans are of course wondering whether there’s a new album on the way.

"Never say never!” teased Billy Duffy in an interview. “Ian and I enjoy the process of making new music, and we feel it's vital to keep the band healthy, even if it's pretty much in the law of diminishing returns area now. Who knows if it will be a whole album a series of singles or an EP? I can say new Cult music will be forthcoming, but these days we don't rush it as there's no point. Quality is key.”

Either way, this concert promises to be EPIC – so don’t delay!! Get your The Cult tickets NOW!!