All fans of NEEDTOBREATHE may have lost a breath or two when the band announced that founder Bo Rinehart is leaving the band. Few bands ever recover from a split up of this sort, and we were all collectively worried that this may be the last we hear of them going forward. But instead, althought difficult, the departure of Bo turned into an emotional new album, and eventually, to a highly anticipated tour. In April, NEEDTOBREATHE announced their upcoming album and tour Into The Mystery with support acts from The New Respects and Switchfoot. The album was released on all platforms on May 6th. After a turbulent recent events in the band, fans are happy to have received a new absolutely stellar album, followed by the announcement of an ever more stellar tour! Secure your tickets by following the link above. 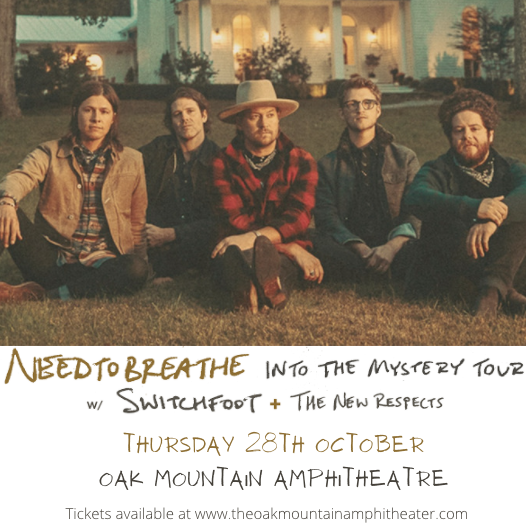 Earlier in 2020, Needtobreathe announced that they would be releasing their seventh album, Out of Body, but unlike the six albums that came before it there would be one crucial difference. Out of Body (scheduled for release late August) will be the first of the band's records without founder (and brother of frontman Bear), Bo Rinehart, who left the band in April 2020. The band reported the feeling of loosing Bo as "strange, difficult but expected". And while it made them question where they are going as a band, they poured a lot of their feelings in the album and reportedly helped them solidify the relationship between them, and fundamentally accept the new dynamic. When it came to recording the album, Needtobreathe took a different approach, shunning the modern desire for endless takes and perfection, and instead opting for a more live, organic band performance. Although never heard live before, the fans should expect to feel that organic emotional feel more than ever before, and connect with their favorite band in a whole new way. Tickets are selling out quickly, so secure yours today by following the link above.