A band that needs no introduction, Alabama comes to Oak Mountain Amphitheatre on Saturday 7th August 2021 The best-selling country band continues to tour in celebration of its 50th anniversary last year and is hitting up cities all over the US performing all your favorite hits from the past five decades, including "Love in the First Degree" (1981), "Mountain Music" (1982), "Dixieland Delight" (1983), "If You're Gonna Play in Texas (You Gotta Have a Fiddle in the Band)" (1984) and "Song of the South" (1988)! Not only that, but they'll be joined for the event by Southern rock icons the Charlie Daniels Band in support! What a show! 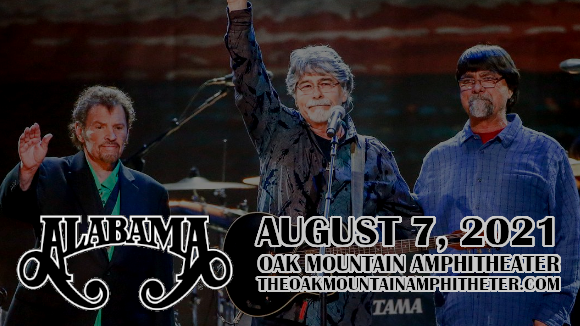 Southern rock band Alabama was founded in Fort Payne in 1969 by Randy Owen (lead vocals, rhythm guitar) and his cousin Teddy Gentry (bass, backing vocals). Originally going by the name of Wildcountry, they built a following throughout the early-1970s by touring the Southeast bar circuit. 1977 was a pivitol year for the band – they changed their name to Alabama and on the strength of two singles they caught the attention of RCA Records, who signed them. The band found istant success with its major-label debut single "Tennessee River", which was the first in a streak of 21 number one singles for the band. The 1980s alone brought the group over 27 number one hits, seven multi-platinum albums and numerous awards, and to date the band has had over 41 number one country records on the Billboard charts. With over 75 million records worldwide, Alabama is the most successful band in country music history. In 2019, the band was inducted into the Musicians Hall of Fame and Museum, who awarded them with the first ever Life Time Achievement Award.