Country fans, we’ve got some seriously exciting news for you – are you ready?? Because Brad Paisley is touring the world in 2019 with his latest album, the incredible “Love And War”. He’s on his way to the Oak Mountain Amphitheatre on Friday 19th July 2019 – no fan is going to want to miss out on this! Hurry and hit the “Buy Tickets,” button to get yours before they go!! 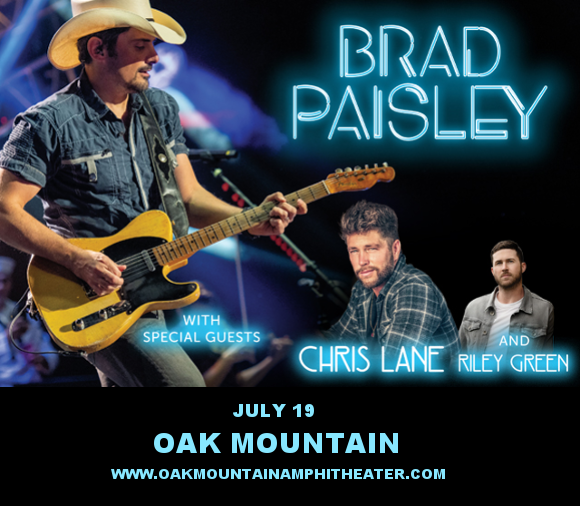 Brad Paisley is without a doubt one of country’s biggest stars. With over 11 million albums sold around the world, the recipient of 3 Grammy Awards, and multiple awards broken for the sales of his singles, he virtually defines the genre. His career has spanned, so far, a total of 11 albums, with “Love And War,” being his most recent.

"After a little bit of time to work on his music outside of the spotlight, Brad Paisley has created, with Love and War, a project which rivals his best work,” read a glowing Pitchwork review, calling the album; “What fans would've wanted out of another Brad Paisley record.” However, that’s not all fans have to look forward to – with the release of his latest single, “Bucked Off,” Brad Paisley has shown us a taste of what to expect from his next studio album, which is scheduled to be released later this year!!

What more could fans want? Well, to hear all these songs performed live by Brad Paisley himself, of course!! Now’s your chance – get your tickets to see Brad Paisley NOW, while you have the chance!!