Groove metal mainstays Five Finger Death Punch just keep going from strength to strength, and this year, they're headed out on a mammoth North American tour in support of their new album, F8! The tour sees them bringing together a stacked support line-up of fellow metallers Papa Roach, I Prevail & Ice Nine Kills, and will be tocuhing down at Oak Mountain Amphitheatre on Saturday 11th April 2020!

“We had an extremely successful, yet tumultuous couple of years as a band,” says FFDP guitarist Zoltan Bathory of the new album. “We didn’t just weather the storm but came out on the other side better than ever. It was a focused sober group recording, our most important album to date and without a question it shows. This album represents rebirth, progression, transcendence both personally and musically.” 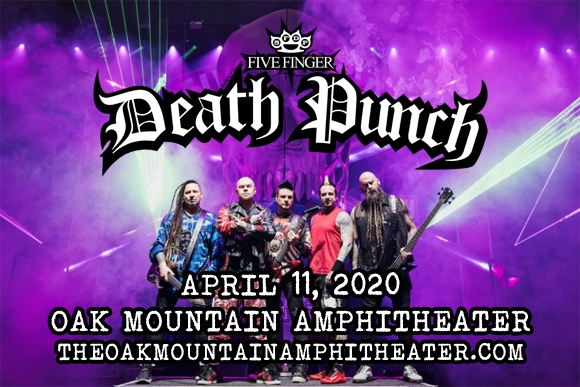 Founded by former U.P.O. guitar player Zoltan Bathory, former W.A.S.P. guitarist Darrell Roberts, vocalist Ivan Moody (Motograter/Ghost Machine), bass player Matt Snell (Anubis Rising), and former W.A.S.P. drummer Jeremy Spencer, American heavy metal band Five Finger Death Punch has overcome several line-up changes since its inception in 2005, and continues to dominate the Billboard charts as one of the biggest metal bands out there. The group burst onto the scene in 2007 with its debut album, The Way of the Fist, and has since released three platinum-selling albums – War Is the Answer (2009), American Capitalist (2011) and The Wrong Side of Heaven and the Righteous Side of Hell, Volume 1 (2013) – and three that have been certified gold. F8, the band's eighth studio album, is released in February 2020.