Foreigner comes to Oak Mountain Amphitheatre on Sunday 30th August 2020 on the 2020 Juke Box Heroes Tour, bringing an epic dose of nostalgia and a night full of some of the biggest rock tunes ever released! Get ready to belt out all of your favorite classic rock songs as the headliners are joined by Kansas & Europe in support!

Europe singer Joey Tempest had this to say about the stint: "The band is super-thrilled that this summer we’ll be back in the U.S.A. … the birthplace of rock 'n' roll. It’s been four long years, and we are honored to be on the road with Foreigner and Kansas for this extensive tour across North America. Strap yourself in! Europe in America once again!” 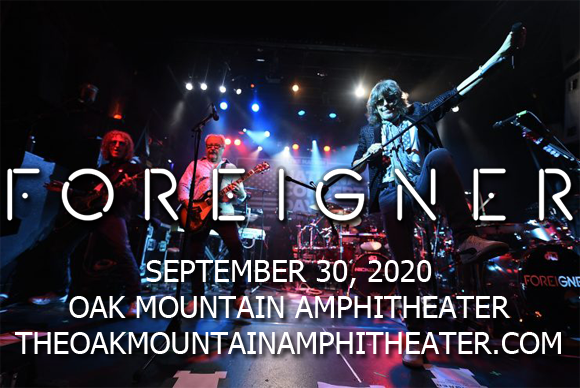 Formed in New York City in 1976, British-American rock band Foreigner's self-titled 1977 debut album brought instant success for the band with the hit singles "Feels Like the First Time", "Cold as Ice" and "Long, Long Way from Home", and was eventually certified five-times platinum in the US. It was the first of a string of six consective multi-platinum albums released between 1977-1984, and the first of 10 multi-platinum albums throughout the band's career. Foreigner have also had 16 top 30 hits, including 1984's "I Want to Know What Love Is", which topped charts all over the globe, including in the United Kingdom and United States, and their 1981 power ballad "Waiting for a Girl Like You", which was another huge success, peaking at number two on the US chart for a record-setting 10 weeks. With more than 80 million records worldwide, Foreigner is one of the world's best-selling bands of all time.