Rock and Roll Hall of Famers Heart have reunited after a three-year hiatus, bringing their Love Alive Tour to Oak Mountain Amphitheatre on Tuesday 20th August 2019! They'll be playing all the hits, plus some rarities and surprises, and they'll be joined in support by the incredible line-up of three-time Grammy Award-winning singer-songwriter Brandi Carlile and old school rock 'n' roll singer Elle King!

"Brandi Carlile is a fresh and authentic artist that we both love….and Elle King is my favorite new artist. She has so much soul and attitude! We are so thrilled to host all these artists on the "Love Alive" tour," said Ann Wilson. 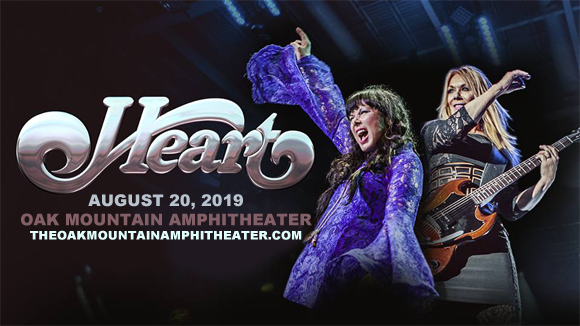 Fronted by sisters Ann Wilson (lead vocals, flute and guitar) and Nancy Wilson (guitar, mandolin and vocals), classic rock band Heart was formed in 1973. With a unique musical style that blends influences from hard rock, folk, easy listening, heavy metal, and adult contemporary, Heart's career has spanned over five decades, and the band has charted top 10 albums on the Billboard 200 in the 1970s, 1980s, 1990s, and 2010s – the longest span of top 10 albums by a female-fronted band. They have released seven top 10 albums in total, and have charted 20 top 40 singles. To date, the group has sold over 35 million records worldwide and they have received four Grammy Award-nominations. They were inducted into the Rock and Roll Hall of Fame in 2013. Heart's most recent album is 2016's Beautiful Broken.