Country fans, you're in for a treat as the phenomenally talented country Lady Antebellum bring their Wheels Up Tour to Oak Mountain Amphitheatre on Thursday 3rd September! The Nashville trio will be joined by special guests Hunter Hayes and Sam Hunt, for a night of rich harmonies, infectious melodies and dancing 'til your feet get sore!

"The magic of being with fans from all over the country is really why we’re ultimately all here,” muses Lady Antebellum's Charles Kelley. "Being able to play off each other on that stage is where we have the most fun." 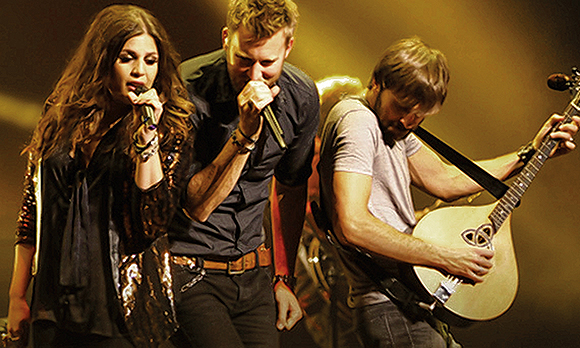 Lady Antebellum were formed in Nashville in 2006 by Hillary Scott (daughter of country singer Linda Davis), Charles Kelley (brother of pop singer Josh Kelley) and Dave Haywood. The trio first came to public attention in 2007 as guest vocalists on Jim Brickman’s single “Never Alone”, having recently signed a contract with Capitol Records. Their self-titled 2008 debut album was launched with instant success; their third single from the album reached Number One, and by the end of 2009 the album had been certified platinum and the band were nominated for a Grammy Award. Their fourth single “Need You Now” was a huge hit both in the United States and overseas and brought them crossover fame, spending 5 weeks at Number One on the Adult Contemporary charts and reaching Number 2 and the Billboard Hot 100. Of their six albums released with Capitol, the first three have been certified platinum.