Are you ready for one of the hottest country shows of the decade?? That's right, it's Lady Antebellum, one of the biggest globally known American country bands in the world, on their “You Look Good” world tour!! With them they're bringing the unbelievably talented Kelsea Ballerini and beautifully honest Brett Young. It's all happening at the Oak Mountain Amphitheatre on Thursday 7th September 2017!! Make sure you're there – get your tickets early to avoid disappointment, as this show will sell out VERY fast!! 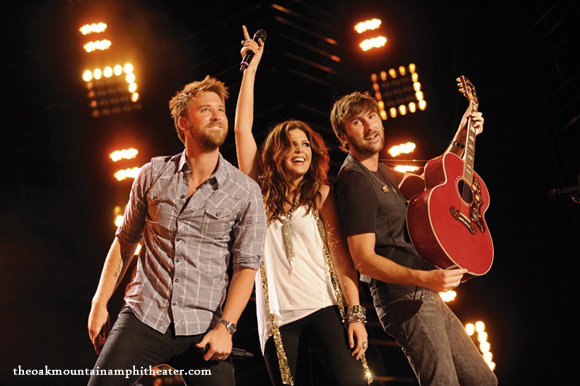 Formed in 2006 by vocalists Hillary Scott and Charles Kelley with multi-instrumentalist Dave Haywood, the trio were swiftly snapped up by the Capitol Nashville record label after their debut as guests on a single by Jim Brickman in 2007. They their first, self-titled album in 2008, and it went straight to number one on the Billboard Top Country Albums chart, the very first time a country group has achieved this with their first album!! On the Billboard Top 200, it reached 4th position, showing it's phenomenal universal appeal, a trend which has continued throughout Lady Antebellum's soaring career.

Recently dropping the “You Look Good,” single (listen below!) as a hint of what's to come, we're very excited to hear the brand new album, “Heart Break”. Mostly country pop with flavours of funk, soul, and jazz, and the brand new appearance of a horn section, the song was released to a warm response from critics. Taste of Country wrote; "any time Hillary Scott can match [Charles Kelley's] easy swagger they look — and sound — good. In fact, Lady Antebellum rarely loses when the two vocalists are committed to the same vocal emotion." With the new album, set for release in early June, we're guaranteed a live performance of amazing new material and what will undoubtedly be one chart-topping hit after another!!!