Pentatonix fans get excited – your favorite a capella group are coming to perform live at the Oak Mountain Amphitheatre on Thursday 2nd August 2018, on tour with their upcoming new full-length studio album!! Grab your tickets while they last!! 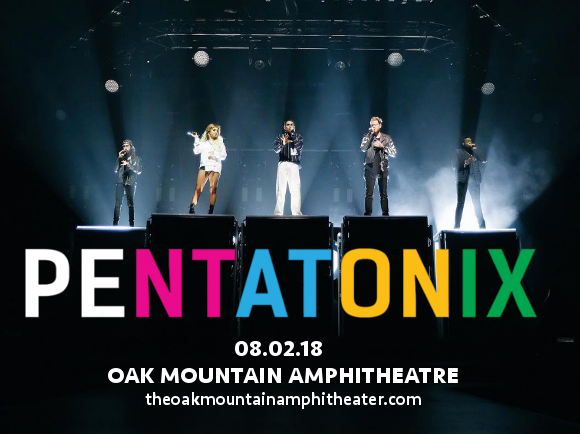 Pentatonix first gained recognition when they won the NBC show The Sing-Off in 2011. After this, the group formed their own YouTube channel and went viral all over the world for their cover versions of well-known songs. Today, their Daft Punk medley has been seen over 250 million times, and their YouTube channel is among the 50 most-subscribed to in the world!! Their first full-length album, simply entitled “Pentatonic,” went straight to number one on the Billboard 200.

Despite their rise to fame on cover songs, Pentatonix have established themselves as much more than a novelty act, and are selective about which songs they choose to cover, in addition to writing and performing their own material. “I think what’s important is that we don’t try to cover things that are really popular anymore,” said Kirsten Maldonado, the group’s mezzo-soprano. “We’re very comfortable in our own sound and what we do and so that’s where our inspiration is from—just things that we are truly inspired by or that we think will work well for us, and not just because something is Top 40.”

What are you waiting for?? Grab your Pentatonix tickets NOW while you still have the chance!!