A band of both substance and spectacle, there's a reason that Phish has a cult following of loyal fans that will travel the country, and in some cases the world, just to see a performance! This summer, the quartet brings its annual tour to Oak Mountain Amphitheatre on Friday 31st July 2020 for a night of unrestrained and joyful jams! Phish is hard to catagorize – each of its four members is an artful musician that draws from a variety of influences, and this shows in their unbidden and often improvized sets! Get lost in the music as this iconic group takes you to higher ground! 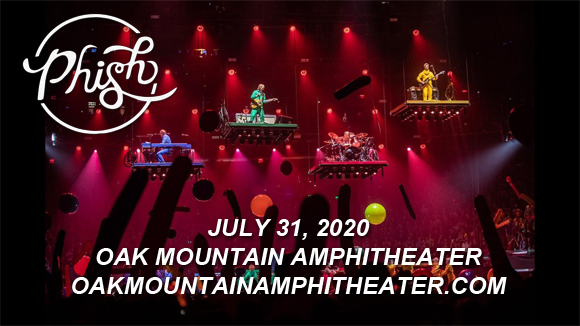 In a world where live music is often punctuated by gimmicks, there are few bands that prioritize the music as much as Phish. The Vermont-based rock band is not afraid to get colorful and a little weird with its live shows, but any stage trickery or overblown production is matched by the sheer quality of musical talent that runs through these four performers. The band originated in 1983, and its current line-up of "Trey, Page, Mike, and Fish" has been a mainstay of the live music scene for over 30 years. The band is known for its melting pot of genres – jazz, folk, country, bluegrass, pop and many other sounds go into the mix when it performs, and every show feels like a constant evolution of sound as they improvize and jam out!