Award-winning country act Sam Hunt comes to Oak Mountain Amphitheatre on Saturday 8th August 2020 in support of his eagerly anticipated second studio album, Southside – a follow-up to his smash-hit 2014 debut, Montevallo! The Southside Tour promises to make it worth the six year wait, as the singer will perform a slew of hits from the new record, including the mammoth hit "Body Like a Back Road," and will see him take to the stage will all the energy and charisma that fans have come to expect from the multi-platinum-selling artist! He's also got a stacked support line-up joining him on the road – Kip Moore & Travis Denning will both be performing, and there'll be a DJ set from Brandi Cyrus! 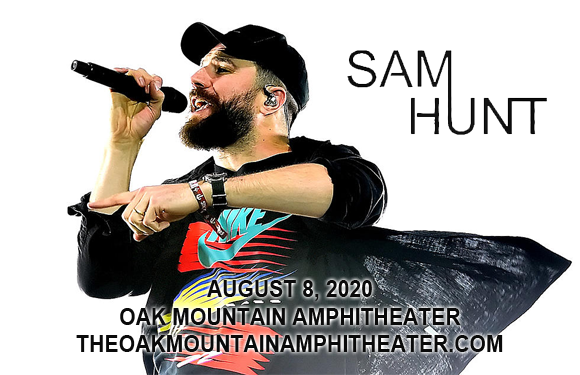 Sam Hunt's alternative take on country music, which has subtle flavors of hip hop and R&B, took the industry by storm when he made his debut in 2013 with the song "Raised on It." The Georgia native initially had his sights on a football career, but he made the transition to music in 2008 when he moved to Nashville, and he soon began writing for a variety of established country acts, including Kenny Chesney, Keith Urban, Billy Currington, and Reba McEntire. His hit-making success as a co-writer led to a deal with MCA Records and he reelased his debut album, Montevallo in 2014, debuting at number one on the Top Country Albums Chart and number 3 on the Billboard 200. It produced five hits, and Hunt broke several records with the hits, landing three consecutive number ones on the Hot Country Songs chart and four on the Country Airplay chart – a first for a newcomer. His second studio album, Southside, is released in 2020, and he has released several successful singles in the interrim, including 2017's "Body Like a Back Road," which reached number 6 on the Billboard 200.