Celebrating the release of the 12-times-platinum global smash hit album Yourself or Someone Like You, alt-rockers Matchbox Twenty will be performing at Oak Mountain Amphitheatre on Tuesday 27th June 2023 (Rescheduled from Tuesday 28th June 2022) (Rescheduled from Tuesday 10th August 2021)! The hit-makers' debut album celebrates its 20th anniversary this year and still sounds as fresh as ever with its anthemic songs like "Push", "3 A.M.", "Real World", and "Back 2 Good"! This tour marks the first time the band has gone on the road together since 2017 and looks to be something truly special for fans! 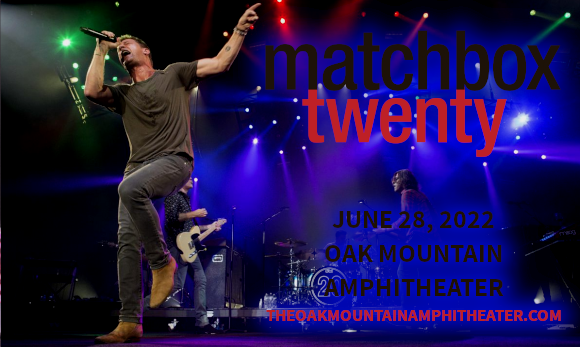 Yourself or Someone Like You was the breakthrough smash hit album that put American alt-rock band Matchbox Twenty on the map in 1996. The album was certified 12-times platinum (diamond) in the United States, and was also a global hit that went multi-platinum in Australia, Canada, and New Zealand, as well as launching several top 40 singles: "Push", "3 A.M.", "Real World", and "Back 2 Good". The band had formed in Orlando, Florida the year previous after Tabitha's Secret (an Orlando band which several members had played in) disbanded. After the huge success of their debut, the band followed with two more multi-platinum-selling albums: Mad Season (2000) and More Than You Think You Are (2002), which got a huge boost from the success of lead singer Rob Thomas, who featured on the three-time Grammy Award-winning Santana single "Smooth" in 1999. Things went quieter after that for the band, with a few line-up changes over the years, but in 2012 the group returned to music with their fourth studio album, North, which debuted at number one on the Billboard 200.